By the Rev. Claudia Greggs 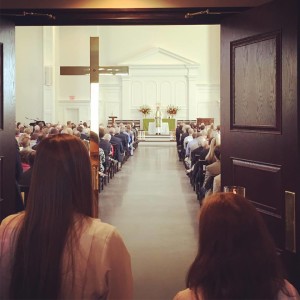 “For nothing will be impossible with God.” These words from the first chapter of the gospel of Luke have great meaning for the people of Holy Trinity Church in Raleigh, North Carolina.  For more than eleven years the members of this congregation have witnessed God doing the impossible on their behalf – and on November 8, 2015 they celebrated the Lord’s faithfulness with great excitement and joy as their new church facility was dedicated by Bishop Steve Wood.

Holy Trinity Church was officially launched in September 2004; however, the groundwork was laid the previous year when a small group of people, from several Episcopal churches in Raleigh, began meeting for prayer.  They sought direction from the Lord about how to respond to the lack of moral clarity and respect for the authority of Scripture which characterized their denomination.  Prayer was the obvious first step to take.

“We are a church that began on our knees,” recalls Martha Underwood, in whose home the group began to meet for prayer.  By January 2004 the Lord’s answer to their prayers was evident – they had organized themselves as All Saints Fellowship, and drawing upon relationships developed over the years with Trinity School for Ministry and other evangelical organizations, they launched a twelve-week Sunday evening preaching series featuring noted Anglican preachers from across the United States.  These services attracted people from the greater Raleigh area who were eager for theologically sound preaching and teaching.

The congregation met for Sunday morning worship in the chapel of St. David’s School, a private Christian school located in midtown Raleigh.  The chapel had also been the site for the evening preaching series the winter before and afforded the growing congregation a beautiful space in which to worship, one that would serve them well for the next eleven years. 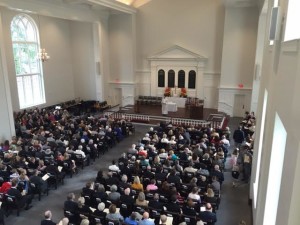 Until a rector could be called, the Rev. Don Roberts, St. David’s chaplain, presided at Sunday morning services.  Meanwhile, the day-to-day operations of the church, and much of the pastoral ministry, was done by members who were eager to serve and contribute to the life of the church.  Local clergy also helped out, as needed.  At every turn, the Lord provided for this congregation.

Within the next year, the vestry of Holy Trinity Church extended an invitation to the Rev. Dr. Michael Green, a renowned Anglican evangelist based in England, and the Rev. David Drake, a recent graduate of Trinity School for Ministry, to become co-rectors.  They accepted and began their terms of service in August of 2005.  The congregation continued to grow and a search was launched to find a suitable plot of land upon which to build a church.

The search for that land would continue for the next five years as various sites were considered.  The vestry felt a call to build near or in the downtown area of Raleigh, close to government offices, several universities, and a growing arts community and business sector.  However, cost was a factor, as well as location, so although over fifty properties were considered, none of them in the target area afforded the amount of space needed at a reasonable price.  But then something occurred which changed all that: the effects of the “great recession” of 2007 began to influence the real estate market in Raleigh – and the Lord would use these circumstances to do the impossible, again.

A property became available in late 2009 at the corner of Peace and Blount Streets – a location on the cusp of downtown Raleigh.  It had been originally intended for commercial use, however, due to the recession, the owners were eager to sell it off.  After prayerful deliberation, the vestry of Holy Trinity made an offer on the property, which included a dilapidated Victorian house.  Their offer was accepted and a capital campaign was begun.  Despite the somber economic forecast at that time, it was successful!

Soon after, David Drake accepted a call to serve as rector of a newly planted Anglican church in Baltimore.  Since Michael Green and his wife, Rosemary, had returned to England the year before, a search was launched in early 2010 to find a new rector for Holy Trinity Church.  Once again, the Lord provided in a time of need and the Rev. Ger Jones, who had been hired the previous year as associate rector, served as interim until a new rector could be found. 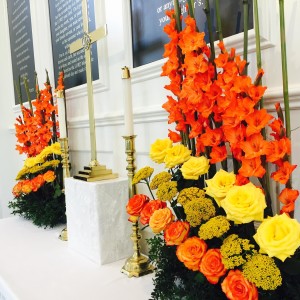 On the sixth anniversary of their launch, the Rev. Dr. John Yates, III presided at his first service as rector of Holy Trinity Church.  Under Dr. Yates’ leadership an architectural firm in Raleigh, LS3P, with roots in South Carolina, was chosen to come up with a design for the new church.  Working closely with Dr. Yates and a committee of church members, the firm developed a stunning plan for a beautiful, airy church, with a soaring ceiling, which would look as though it had been on that plot of land for many decades.  The presence of the Holy Spirit throughout the design process was evident and the plan was enthusiastically endorsed. Ground was broken in May of 2014.

In the meantime, ministry partnerships were launched with non-profit Christian organizations serving those in need in the downtown area and the Victorian house was restored to beautiful effect to serve as offices for the growing church staff.  Prayer teams, which had been praying over the site since its purchase, continued their ministry of prayer all throughout the construction phase.  By God’s grace, there were no construction delays, or accidents, and everything was completed on time.  Holy Trinity became the first new church built in downtown Raleigh in over fifty years.  The first service in the new building on Peace Street was held on September 13, 2015.  An overflow crowd of 650 was in attendance!

Although construction is over and the move is completed, the church’s narrative has only just begun.  Positioned right across from William Peace University, around the corner from many government offices and in the midst of many new businesses, apartment complexes, and an established, vibrant neighborhood, Holy Trinity Church has many exciting opportunities for evangelism and service in God’s name before them – and a number are already underway.  Yet, in the midst of change, growth and new ministries in the heart of the city there is one thing that remains constant:  The church that began on its knees knows that nothing is impossible for God!

The Rev. Claudia Greggs is the Clergy Associate for Pastoral Care at Holy Trinity Church in Raleigh. 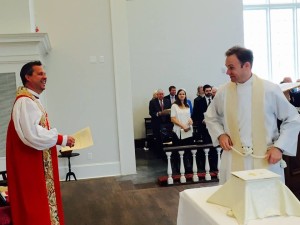 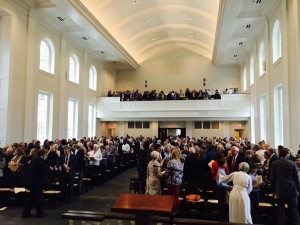 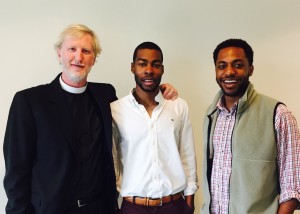 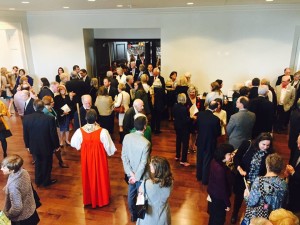