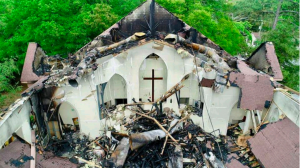 At 4:25 am on April 22, Bishop Steve Wood received a phone call from a parishioner who lives across the street from St. Andrew’s Church in Mt. Pleasant, S.C. “The Ministry Center is on fire.” He immediately went to the church to find the Ministry Center roof engulfed in flames. By 5:15 the congregation had been notified that there would be no services that day and by six o’clock, the local news outlets were reporting on the fire.

This was the largest fire that anybody in Mt Pleasant had ever seen. As units from neighboring cities sped across the Cooper and Wando Rivers, they could see the glow of the fire in the Old Village.

As Bishop Wood watched, he walked around the block to gain a different vantage point and to see the extent of the fire. Residents of Rose Lane, located behind the church, had been rousted from their beds by the noise and lights of the multiple fire engines. In the dark of early morning they recognized that Steve was the pastor of their neighborhood church. One family invited him to the second floor deck of their house so he had a better view. Later, somebody brought him a cup of coffee. As he made his way around the block and back out to the parking lot in front of the Ministry Center, some simply stood there with him in silence. The presence of the neighbors that day was a gift that will not soon be forgotten.

Throughout the morning, people gathered in the parking lot and stayed long after the flames were extinguished. Some arrived expecting to attend church that day. Some arrived in their pajamas. Members, neighbors, some who had just a fleeting association with St. Andrew’s came. And they began to tell the stories – stories of God’s goodness that had taken place within the four walls of the building. Families coming to church for the first time as a family when their child was enrolled in the Day School. People who had come to know Christ as a result of the Alpha course. Healings that had taken place. Marriages restored. Wayward sons and daughters returning home and returning to the Lord. Stories of weddings, baptisms, and funerals of much-loved saints.

Bishop Terrell Glenn, the rector of St. Andrew’s in 1996 when the Ministry Center was built, recounted a gathering the day before the building was consecrated. There had been an open house to give tours and give people the general layout of the building. After the open house, the vestry, staff, worship team, and prayer teams stayed behind and moved through the building and praying. Terrell said that at first the prayers were a bit vague. “Lord, please bless the people who attend church here.” As the evening went on the prayers became bolder and more specific. “Lord, will you heal people here? Please restore marriages here. Lord, bring people to know you here.” Those prayers spoken 22 years ago have been answered.

As word spread about the fire, word came back to St. Andrew’s that many congregations in Mt Pleasant and around the country, began their services with prayers for the church. Local pastors called and texted Steve Wood all day long. Immediately both members and non-members asked how they could help. The response to the fire has been a bit overwhelming for the rector, staff, and members. “We’re used to being on the giving end,” Steve said to his congregation. “I have to tell you. It’s a bit humbling to be on the receiving end.”

The church has continued to move forward. The staff had their regular staff meeting the morning after the fire, hosted by Whole Foods in their conference room. The third of three new members’ classes was hosted by one of the new members in their home the evening after the fire. Thursday Staff Bible study was held in the parking lot. The Historic Church hosted a wedding less than a week later. One week after the fire, St. Andrew’s had four services in the Historic Church and two services at Mt Pleasant Academy, a local public school. That evening, there was a New Members’ Service and a reception for the new members. The next day, the church hosted a two-part lecture by the Rev’d Dr. Ashley Null. The mission of the church – connecting people to the presence and power of Jesus Christ – continues on.