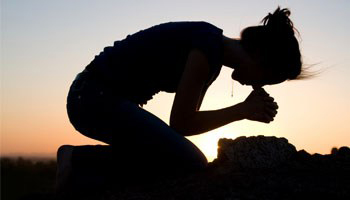 A woman was seen late one night searching the sidewalk underneath a streetlamp. “Did you lose something here?” someone asked. “No,” answered the woman, pointing across the street to a dark alley. “I lost it over there, but the light is better here.”

Until recently I was like that woman, searching under the bright lights to find what I seemed to be missing. The Lord had worked a radical transformation in me after I surrendered my life to Him over 30 years ago, and I have always felt a deep desire to see Him perform this same miracle in the lives of other people who are far away from Him.

I had become immersed in Christian life and community where I certainly could see God at work among my fellow believers. But the world from where I had come still seemed very dark. Standing under the bright light of God’s presence in the body of believers surrounding me, I could not perceive the power of the Holy Spirit at work outside the church.

Then I went to prison.

I went in for the first time in March 2016, and since then I have been in and out of prison many times. I serve as a volunteer at North Carolina Correctional Institute for Women (NCCIW) in Raleigh through the ministry of Kairos Inside.[1] Volunteers from all around the state and from multiple Christian denominations come together twice a year to lead a four-day retreat inside the prison. The Kairos retreat model evolved from the Cursillo movement back in the 1960’s in which participants listen to and discuss a series of talks and meditations introducing them to the basics of the Christian faith. Once an inmate has completed her Kairos weekend, she is invited to join weekly prayer and accountability groups along with other Kairos graduates inside the prison and with volunteers from the outside.

I was well into the training for my first Kairos weekend as the season of Lent began. I was reading about the early ministry of Jesus when I noticed something new to me in the Gospel accounts of His baptism. I realized that my impressions had been shaped and influenced by traditional Christian art in which Jesus and John are often depicted standing alone in the clear, calm water as Jesus is baptized and the Holy Spirit descends upon Him.

As I read carefully the story of Jesus’ baptism, my mental image of the event began to change. Matthew tells us that people from Jerusalem and all Judea and all the region around the Jordan were going out to John, and they were baptized by him in the river Jordan, confessing their sins. And Jesus also came from Galilee to the Jordan to be baptized by John (Matt. 3:5-6, 13). Luke tells us that when all the people were baptized, and when Jesus also had been baptized and was praying, the heavens were opened as God proclaimed his great pleasure with His son, affirming the true identity of Jesus (Luke 3:21-22).

God revealed His Son in the presence of a crowd who were confessing their sins, asking forgiveness, and being baptized in a river churning with mud from all the people wading in and out. Those who knew they needed to be forgiven were granted the privilege of witnessing Jesus revealed as the Son of God. Meanwhile, the religious leaders of the time stood at a distance sneering and grumbling over the fact that Jesus regularly hung out with sinners (Mark 2:15-17).

I did not immediately understand how God was using my newfound understanding of this event to prepare me for prison ministry. But this image I now had of Jesus, clean and sinless, plunging into that dirty river with a crowd of people wanting forgiveness for their sins was crystal clear in my mind as I stepped into the prison for the first time.

And there He was.

Jesus is inside the prison. His light and His power are substantial and intense against a backdrop of darkness and oppression. I had to laugh at myself, thinking in those months leading up to the retreat that I was preparing to take Jesus into the prison.

He is already there.

He has plunged into the dirty prison just as He plunged into the muddy Jordan River to be with people who know they need to be forgiven. And like the people watching on the day Jesus was baptized, the women in prison get to be witnesses of the power of the Holy Spirit as He reveals Jesus as the Son of God.

The presence of Jesus in the prison is so undeniable, there is no need for tiresome apologetics to convince these women that He exists. They can see Him clearly for themselves. But many of them do not understand the boundlessness of His grace, love, and forgiveness. They need to be told that He is there because He loves them, because there is nothing they have done that He is not willing to forgive if they come to Him, and because He wants to be with them forever. I am awestruck at seeing the miracle that happens when these women realize the truth about Jesus and what He is offering them. At the close of the retreat on Sunday, some of the participants are barely recognizable as the same women who came in on Thursday afternoon. Imagine the impact of those visible transformations on the rest of the prison population.

I discovered that Jesus is not waiting at my church for me to take Him out into the darkness of the world. He is already at work there and has been from the beginning. My purpose is not to choose some great work out in the world to do for God. My purpose is to find the place He has appointed for me to join Him in His ongoing work. I have found that place inside a prison.

When we have lost something, we can often find it by going back to the last place we remember seeing it. I was looking under the light, trying to find the power that had transformed my life all those years ago, when I realized that Jesus had first appeared to me in the darkness of my own heart. He was beautiful and brilliant standing there in the middle of my messed up life, and there was nothing for me to do but follow Him.

When I go into the prison, I can see Jesus there in the middle of all those messed up lives, beautiful and brilliant, lighting up the darkness and offering life and freedom to the prisoners. Furthermore, I don’t have to go very far to find Jesus at work in the darkness. He is hanging out with the sinners inside the prison and with us sinners outside the prison as well. There is still darkness inside of me, and if I am brave enough to look, I can find Jesus there waiting for me to join Him in the work of bringing light into my own dark places.

We don’t all have to go to prison. There is plenty of darkness out there in the world beyond the light of our churches where Jesus is waiting for us to join Him in His work of bringing light. The parable of the sheep and the goats in Matthew 25 used to make me feel uncomfortable, because it sounded to me as though Jesus is saying He will not be pleased with me if I do not do enough to help ease suffering in the world. That may be true, but I have discovered that He is saying so much more than that. Jesus says that when we feed the hungry, care for the sick, and visit those in prison, we are doing it for Him. I always assumed He means it is as if we are doing it for Him. But I have discovered that we truly do it for Him, because He is there.

[1] Kairos Inside is a program under Kairos Prison Ministry, an international organization dedicated to sharing the transforming love and forgiveness of Jesus Christ to impact the lives of incarcerated men, women, and youth, along with their families, and to help them become loving and productive citizens of their communities. Kairos Prison Ministry serves around 500 prisons and communities in 35 states and nine other countries. Kairos Inside actively serves in 25 men’s and women’s prisons across North and South Carolina.

For more information about becoming involved in Kairos, please contact the author smpullen@gmail.com.