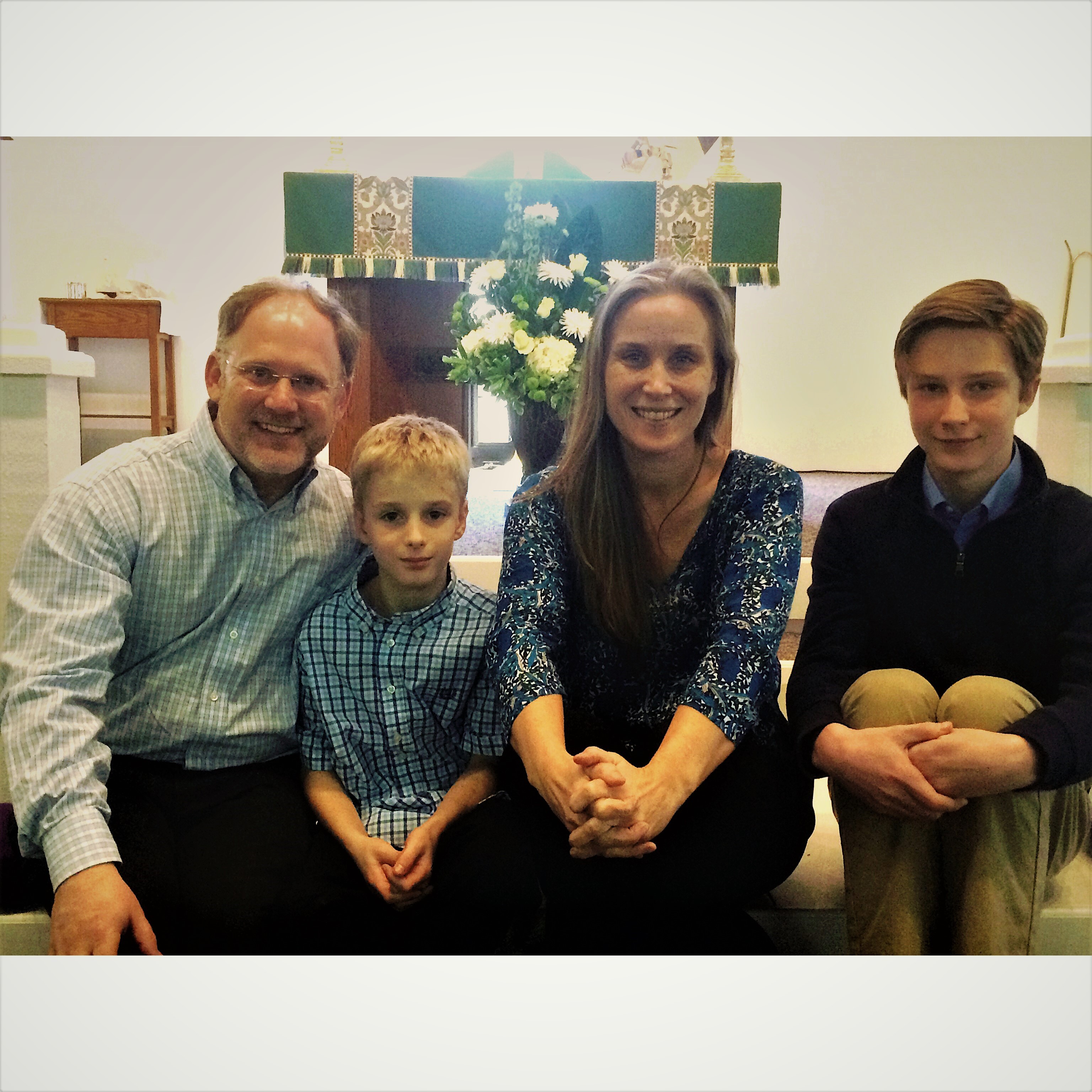 Allen and Rachel Hill arrived in the U.S. in the heat of the summer of 2016. Besides leaving behind the mild South American winter, they also concluded a successful 16- year mission assignment, said goodbye to many close friends and associates, and left the only home their sons, James and John, have ever known. The Hills were sent to Peru in 2000 by the Society of Anglican Missionaries and Senders (SAMS) and have come to Raleigh on a study leave assignment. Both Allen and Rachel were ordained in Peru and are canonically resident in the Anglican Diocese of Peru.

Allen’s arrival in North Carolina was a homecoming. He grew up in Raleigh, attended St. Michael’s Episcopal Church, and graduated from Broughton High School. His undergraduate studies in philosophy at Guilford College forced him to question and evaluate his beliefs and worldview. During his freshman year, Allen joined a small group Bible study. He says he heard the Gospel stated clearly for the first time and embraced a personal relationship with Jesus.

Allen attended Trinity School for Ministry in Pittsburgh where he earned a Master of Arts in religion. He was intentional about his decision not to pursue a Master of Divinity, believing that a strong laity is vital to the growth of the Church.

During his final days in Pittsburgh in the summer of 1997, Allen met his future wife, Rachel Godfrey. He was preparing to leave for India on his first overseas mission assignment. Rachel was beginning her first year of seminary and admits she wasn’t thinking about marriage. Her reluctance to date Allen was the very thing that set the stage for their relationship to develop. They agreed to write to each other during the year Allen was in India, and both eventually realized their friendship had caught fire. They became engaged when Allen returned and were married in 1998. Two years later they would leave for Peru.

Rachel grew up in England on the outskirts of Nottingham. Her father, Bill Godfrey, the now retired bishop of the Anglican Church of Peru, served as parish priest in a small mining town. When she was 8, Rachel read a biography of Gladys Aylward, a British missionary to China, and vowed that she too would become a missionary.

Rachel experienced her first overseas mission at age 14 when her father accepted a call to serve as rector of the sole Anglican church in Uruguay. The move to South America was the first of many extended separations from friends and family throughout her life. Her parents remained in Uruguay while Rachel returned to England in 1988 for University.

Rachel was in her third year of Latin American studies when the Lord reminded her of her vow to be a missionary. She describes her teen years as a time of gradual falling away from her childhood faith, but at the age of 21, she experienced a spiritual renewal. She recalls the significant moment when she realized that her faith was to be all or nothing. The Word of God came alive, her prayer life intensified, and the liturgy she had heard and read all her life suddenly seemed to be expressing the deepest cries of her heart. She realized that she had no power in herself to change another person’s life, but she discovered the power available to her through the Holy Spirit to live out God’s missionary call on her life.

A few years after her spiritual renewal, Rachel accepted an internship at Truro Church in Fairfax, Va., at the invitation of Martyn Minns, then the rector at Truro. Rachel heard clearly from God that she was to attend seminary to be equipped for missionary service. She asked the Lord for three things: a place at seminary, a visa to stay in the U.S., and living expenses. While she was earning a Master of Arts in mission and evangelism from Trinity School for Ministry, Rachel says she never lacked a single thing. God provided the three things she asked and much more, including a husband.

In 1998, the same year Allen and Rachel were married, Rachel’s parents relocated to Peru when her father was elected bishop of the Anglican Church of Peru. When Bishop Godfrey realized the need for people to recruit, equip, and train indigenous leaders in the Peruvian Church, he knew just the people to ask. The Hills moved to Peru in 2000 to take on the job of founding a seminary in Arequipa, and Allen became the first dean of The Saints Augustine Anglican Seminary. He handed over the reins of leadership after the first class of students graduated, and he and Rachel moved to the capital city of Lima to establish a second campus.

Allen’s experience as dean of the seminary led him to reconsider his earlier position on ordination. As he instinctively took on a pastoral role in his relationships with his students, the path to ordination seemed to unfold naturally. Allen and Rachel both were ordained into the diaconate in 2003, and two years later, Allen was ordained to the priesthood.

The Hills welcomed their first child, James, in 2002 and his brother, John, two years later. Starting a family shifted Rachel’s main focus, but she still maintained her ministry responsibilities. She taught several classes in the seminary, helped lead retreats, and served as Diocesan Chaplain to Youth Ministry.

In 2013 Allen was called to serve as interim rector of The Cathedral of the Good Shepherd in Lima. What began as a temporary position stretched on for three years until 2016 when the Hills began their preparations to come to the U.S. Allen and Rachel felt torn between their love for the congregation at the cathedral and their calling to train lay and ordained leaders to serve the church.

The Hill’s main ministry focus will always be training indigenous church leaders where there are none. Their vision for reaching the lost is strategic and multiplicative. Taking the Gospel to the ends of earth requires more than making converts; it involves training those converts to make disciples who will make disciples. The Hills believe their job is to work themselves out of a job by establishing strong leaders who will carry on with the work of the Church in their own culture. Allen and Rachel achieved their goals in Peru where the Anglican Church is now thriving under Peruvian leadership. Before their departure, the Hills were commissioned and sent out with the blessing of the Anglican Diocese of Peru as Peruvian missionaries to the U.S.

Rachel describes her return to South America in 2000 as a joyous homecoming, in part because her parents were there, but mostly because she feels such a deep connection with the people of Latin America. With equal joy, Allen describes the return to his hometown of Raleigh this past summer. Here is the lone note of sadness in this extraordinary story of the faith and obedience of two joyful people who are filled with gratitude for all God has done in their lives. Because their homelands are separated by thousands of miles, Allen and Rachel will never fully share the joy of coming home. Rachel feels blessed to be close to Allen’s family and to see him content and at home in Raleigh, but she longs for the day when they can visit her own family in England.

The Hills look forward with great expectation to going wherever God calls them next, and they are actively pursuing the experience and education to equip them for their next mission assignment. Allen is simultaneously pursuing a master’s degree in international education from UNC-Chapel Hill and a Doctor of Ministry degree in theological education from Virginia Theological Seminary in Alexandria. The Hills are worshipping at Church of the Holy Cross in North Raleigh where their loving presence and ministry have been a tremendous blessing to the congregation.

James, 14, and John, 12, are settled into their respective schools and have made friends at school and at church, but Allen and Rachel say the transition has not been easy for their sons, both of whom were born in Peru and have never lived anywhere else. James is the same age as Rachel when her family moved to Uruguay, so she empathizes with her children’s struggle to integrate into a foreign culture. When asked if the transition has been hard for him, James simply nods. What 14-year-old could find adequate words to explain what it feels like to come “home” to a country in which you have never lived, where everything is strange and new? The culture, the food, and the schools are all so different from what James and John have known. Allen and Rachel are very proud of the courage and resilience their sons have demonstrated in this time of transition.

Another major challenge the Hills face is the decline in funding from their ministry supporters. When missionaries are between assignments or on study leave, financial partners often assume the need for support is on hold. Nothing could be further from the truth. Rachel is finding ways to supplement the family’s income while Allen attends school full time, but living on the reduced stipend from SAMS is difficult. They are quick to point out, though, how grateful they are for their faithful ministry partners. God has never failed to provide for their family, and they are neither anxious nor fearful about the future.

Allen and Rachel send out a regular prayer letter to those who want to follow their journey and pray specifically for their needs. They emphasize that prayer is absolutely essential for the protection and success of missionaries serving on the front lines. Subscribe to their prayer letter by sending Rachel an email at rachelhill@sams-usa.org and go to https://secure q.net/Donations/SAMS/3373 for more information about SAMS and the Hill’s support needs. Also consider inviting them to your church to speak about their experiences.

The Hills know that carrying out the Great Commission requires great resources, both human and financial. They have experienced firsthand the common plight of missionaries around the world who struggle to keep their ministries afloat and their families fed. Together Allen and Rachel have over 47 years of experience on the foreign mission field, and they offer illuminating insight about why resources remain scarce for many missionaries. The explanation is not a lack of openhandedness on the part of the Church. On the contrary, the people of God are known for responding generously to those in need. But sometimes well-intentioned humanitarian projects drain resources from long-term missionaries. Raising funds for a project that yields immediate and gratifying results, building an orphanage or a school, for example, is far easier than raising ongoing support for leaders whose labor has the potential to win an unreached population for the Gospel over the course of several generations. Furthermore, practical needs such as orphanages and schools are often met naturally over the term of a long-term mission project.

Serving those in need goes hand in hand with sharing the Gospel. The Church must continue reaching out to all those in need while rededicating ourselves to taking the Gospel to the unreached. We must be willing to invest in gifted leaders like the Hills who are committed to spending their lives fulfilling the Great Commission. At the end of the age, in the very last days before Jesus comes, there will be people still in need of the Church’s practical help. But the time appointed for taking the Gospel to the ends of the earth will come to a close. Allen and Rachel Hill have a sense of urgency about the time remaining to go into all the world.