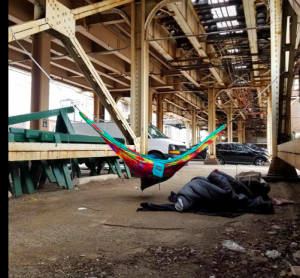 Hammocks for Homeless is a charitable ministry in Rock Hill, SC  founded by Sherry May, the wife of Rev. Pat May who is the planter and rector of Church of the Resurrection in Rock Hill. Born out of the fruits of having a mindset that Christ is raised from the dead and He is making all things new; this is a foretaste of that reality. Hammocks for Homeless is on a mission to provide unsheltered homeless with hammocks so they don’t have to sleep on the ground.

Homelessness has always been a heartfelt point of prayer and service for the May family. Six years ago, the then 12 year old Julie May was recognized by a local non-profit for her contributions toward Housing for New Hope, a halfway house for homeless people in the Durham, NC community to have temporary housing while they returned to the workforce and regained independence. Fast forward to today, sixteen year old Jimmy May is a camp counselor at a local Christian youth camp spending his naps and nights sleeping in a hammock along with his campers. As he has grown accustomed to hammock life and expanded the practice amongst his siblings while at home, a ministry vision was born and the next thing the May family knew, their backyard was overrun with hammocks as they learned how to practically do what God had put in their hearts. Through this process, God gave a vision of how we can make a real difference in the lives of unsheltered homeless in Rock Hill, SC and everywhere!  The first group of hammocks were given to the men’s warming shelter.

There are two practical applications for Hammocks for Homeless: 1) Directly providing hammocks to homeless people and 2) Providing hammocks to homeless shelters to be used as emergency housing in multi-use space. Hammocks for Homeless envisions a future where no one has to sleep on the ground. To this end, partnerships with other local agencies, like ReNew Our Community and the Men’s Warming Shelter at Bethel UMC, are already being formed to strengthen the benefit to the growing number of homeless in York County, SC.

Matthew 8:20 And Jesus said to him, “Foxes have holes, and birds of the air have nests, but the Son of Man has nowhere to lay his head.

Sherry and Pat May and family