Perspectives is the occasional paper from the Diocese of the Carolinas

By the Rev’d Claudia Greggs 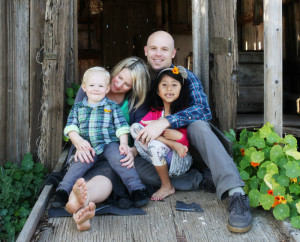 It may seem like Gary Ball is a long way from home, but that’s not really the case. Last December Gary, his wife Susannah and their three children, Flora, age 7, Elias, age 3 and Karis, age 10 months moved across the country from Santa Cruz, California to plant Redeemer Anglican Church in Asheville. But Gary and Susannah grew up in the South – Susannah’s family lives in Atlanta and Gary’s in Florida – and their move to Asheville was God’s answer to prayer about returning to their roots in the Southeast.

Gary, who is 38 years old, is the son of a Church of the Nazarene pastor and was himself a Nazarene pastor for 15 years. When asked what is it about Anglicanism that led him to choose to plant an Anglican church, Gary enthusiastically talks about how Anglicanism speaks to a post-modern culture (a culture that has severed itself from its roots) by offering instead “a clear identity, a place to belong, a clear understanding of who we are as Christians.”

He also notes that “people are leaving other denominations today because they don’t know who they are. In the Anglican Church, the Book of Common Prayer helps to shape identity through worship, which also counteracts our culture’s trend toward individualism. When Anglicans gather for worship on Sunday mornings there is a corporate confession and a corporate affirmation of faith.”

Gary was also drawn to the sacramental heritage of the Anglican church, in which baptism and weekly Eucharist play important roles. He attended the Anglican 1000 church planting summit in Wheaton, Illinois last year where he met Winfield Bevins, Canon for Church Planting in the Diocese of the Carolinas. Gary talked to Winfield about his deep appreciation for Anglican theology and liturgy and he was impressed with the vision Winfield described for planning churches here in the Carolinas. So when Gary called Winfield several months later, Winfield invited him to plant an Anglican church in Asheville.

Gary describes Asheville as “an old city being completely renovated;” something he finds attractive. The part of Asheville where he and his family live is called “West Asheville.” “But,” Gary points out, “it used to be known as ‘worst’ Asheville.” Now artists and young families are moving into the neighborhood and Gary thinks the church has an important role to play in bringing the city back to life. He also thinks an Anglican church will fit well in Asheville because many of its residents were drawn there by its reputation as a place supportive of the arts. “The liturgy speaks to an artistic community – the seasons, the colors, the mystery of the Eucharist.”

In order to plant a church 3,000 miles across the country, Gary and Susannah knew they would need to put into place systems of support before they left. Not only would they be leaving behind jobs and friends, they would also be starting a church from scratch, in a city with which they were not yet familiar, and with no church building or even members awaiting their arrival.

So one key decision they made was to invite some friends in California and some family members in Nashville to join them in the move and become the nucleus of a launch “team” for the new church. They also raised financial support before they left in order to help sustain their family in the year ahead, since they would not be able to support themselves to the extent necessary while they worked to get the church underway.

Since he arrived in Asheville, Gary has been hard at work mentoring his launch team and seeking additional committed Christians – those with a calling and a vision for church planting – to join him. Right now the launch team is meeting for training and prayer in Gary and Susannah’s home, but soon they plan to hold worship services in a building. An official “launch” – the point at which a church plant is ready to hold public services of worship – is scheduled for September.

When asked about how the members of the Diocese of the Carolinas can pray for him and his launch team, Gary identified three basic needs. The first one is for direction from the Holy Spirit – in finding a building in which to gather for worship and in finding another family to join the launch team. The second is for his family – that his children would find new friends in Asheville and that he and Susannah would make the right decisions about schooling for them. Thirdly, Gary asks for prayers for financial viability – for his family (he’s looking for a part-time secular job so he can help support his family until such time as the church can pay a salary) and for the new church plant, which he hopes will be welcoming to those who are hungry for the gospel.

Gary is excited about what God has in store for Redeemer Anglican Church and he’s encouraged by how the Lord has been answering every prayer since before leaving California. Although it wasn’t easy moving a family of five across the country, now Gary is “home” – in Asheville and in the Anglican Diocese of the Carolinas.

Claudia Greggs is a priest serving in the Diocese of the Carolinas.