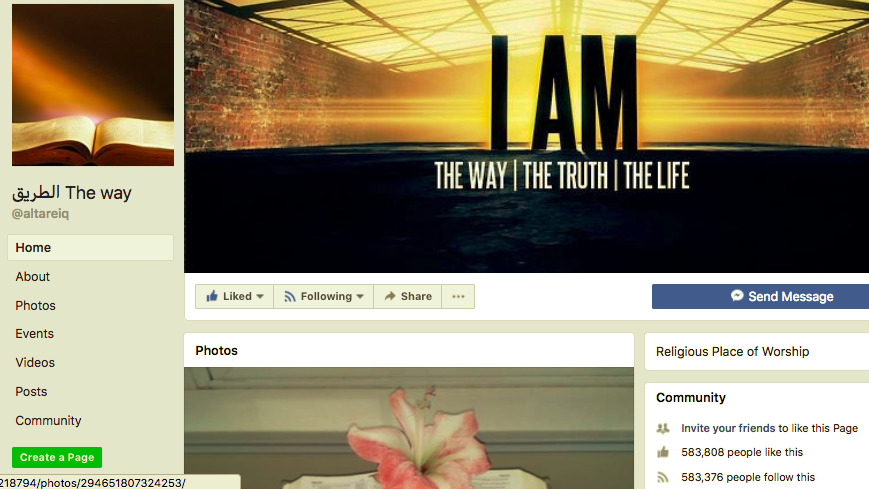 St. Thomas Church is a exciting mission minded growing church in the Charleston area. This congregation believes the Gospel changes everything and therefore St. Thomas Church exists to “raise up ambassadors of the Gospel where we live, work, play, and learn, and to extend Common Grace to our Community through authentic relationships, service, and beauty through the arts”. Worship takes place in an elementary school cafeteria. With well over 100 worshipers on Sunday, you will possibly find an ambassador of the Gospel who also happens to be a 47 year old Medical Doctor sitting humbly in the back.  This kind Doctor, Sherif Yacoub, reaches over a half million men and women with the love of Jesus in the Middle-East through his Facebook online ministry called “Altareiq” (Arabic word which means “The way”). St. Thomas desires to partner and support this exciting ministry.

Sherif was born and raised in Egypt until the age of 30 and has been walking with Jesus for as long as he can remember. Sherif had two spiritual encounters with Jesus that shaped his life and ultimately led him to ministry. The first encounter was in New York City, following the events of 9/11/2001, and the second was through a Holy Spirit revival occurring at St Michael’s Church in Charleston, SC, from 2005 to 2007.

In 2013, he started a Facebook Page to share some insights about the Bible. The page was originally in English and in Arabic, yet, to his amazement, it seemed that only the Arabic posts received attention. Initially, Sherif had 20 followers, but the numbers quickly increased. There was an intense interest from Muslims across the Middle-East. By the end of 2013, there were more than 20,000 followers. As the workload increased, Sherif hired a Christian refugee from Iraq, who had fled ISIS reign of terror to Jordan, and subsequently to the US, and, also an Iraqi Christian living currently in Lebanon. The number of followers kept increasing exponentially, reaching 200,000 by 2015. Through the page, the Gospel was preached and introduced men and women across the Middle-East to the love of Jesus. Several accepted Christ as their Lord and Savior over the Internet or over the telephone. Others had already been secret converts for a while, yet had no mentorship or discipleship. Altareiq worked with a ministry partner, Endure International, to get the converts locally discipled and baptized, yet the hunger for the Word could not be satisfied by the scarce resources on the ground. In 2015, Sherif’s ministry started a group on Whatsapp to disciple the converts. They have strict criteria to choose who joins that group. So far, they have mentored more than 100 converts, several of whom now have their own Christian ministry. Today, Altareiq’s ministry has over a half million followers on Facebook from 45 countries. The page reaches 100,000 people every month with the message of the Gospel. Check it out for yourself at  www.facebook.com/altareiq

In 2015, following the events of the Charleston Church shooting, Sherif felt the call to reach the Western, English-speaking world with the same message of the Gospel that he saw transform the Middle- East. He started a Facebook page which now has 25,000 followers. Here is the link www.facebook.com/1h4jc

Sherif says “It has been amazing to get to watch the Lord transform our world, one person at a time. To see Him do it through us goes beyond what words can express.” If the Lord calls you to partner with “The Way” ministry through prayer or financial support or if you want to know more about the ministry you may contact Sherif by Emailing him at szyacoub@gmail.com or St. Thomas Anglican.