A Fickle Storm and a Faithful God

by the Rev. Claudia Greggs 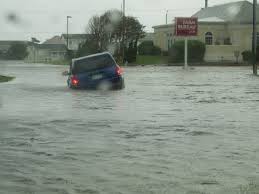 “Would he, or wouldn’t he?” That was the question on the minds of millions of residents in North and South Carolina in early October as Hurricane Matthew took aim at the coast of the southeastern United States. Matthew was officially declared a hurricane on September 28 and quickly intensified into a Category 5 storm, with winds of up to 160 mph. Six days later, Matthew slammed into Haiti and eastern Cuba and then crawled, ever so slowly, northward. While Matthew took his time, there was much debate among meteorologists about where he would go next – northwesterly, over Florida; northeasterly, up the coast of Georgia and into the Carolinas; or would a strong cold front, approaching from the west, push him eastward and far out to sea?

In the meantime, Bishop Steve Wood had a decision to make. The Diocese of the Carolinas was scheduled to hold its annual clergy retreat, followed by Diocesan Synod, at Holy Trinity Church in Raleigh, North Carolina, beginning Thursday, October 6. By Wednesday, it looked like the coast of South Carolina would be hardest hit, rendering it impossible for clergy and delegates from a good portion of the state to get to Raleigh. Bishop Wood wisely decided to postpone the retreat and Synod.

Finally, on October 8, the storm made landfall southeast of McClellanville, South Carolina, and broke apart over North Carolina, deluging both states, particularly along the coastline, with rain.  By this time, residents on the Outer Banks thought they had been spared the worst of the storm. Since landfall was 350 miles to the south, the storm surge from the ocean and sound was not likely to be as devastating as it has been in many other storms. The locals, at least, were not concerned. However, the deluge of rain caught everyone by surprise. The ground all along this stretch of land, from Corolla to Oracoke, was still saturated, due to a tropical storm that blew in over Labor Day weekend, so the rain from the remnants of Matthew quickly flooded roads and buildings, causing significant damage.

The Rev. Joey Fitzgerald, rector of Church of the Outer Banks, experienced the flooding first-hand. The first floor of his home, where he and his wife, Brandie, and their four children live, was filled with three inches of water – including the children’s bedrooms and the family room. Although most of their furniture was salvageable, the carpeting was ruined and all sheetrock and insulation below the water line would need to be cut out and replaced. And while the Fitzgerald’s had flood insurance, their claim was denied due to a discrepancy, of which they were unaware, between city building codes and insurance requirements. FEMA granted them a mere $250.

Several families in the church fared even worse. The water swelled to four feet inside the Surfin Spoon, a popular frozen yogurt restaurant owned and run by Jesse Hines, a former professional surfer, and his wife, Whitney. Because Matthew struck before the tourist season was over, the damage to the Surfin Spoon was particularly costly. Insurance would cover part of the cost of repairs, but there was no compensation for the loss of business. As with any endeavor catering to tourists, the Hines’ rely upon the profits they earn from April to Thanksgiving to get them through the entire year, due to a sharp decline in the number of visitors to the Outer Banks during the winter months.

Another couple in the church awoke on the morning of October 8, unware of the flooding that had occurred in their first-floor apartment during the night, and immediately noticed their child’s Pack n’ Play floating in over six inches of water. Most of their furniture could not be salvaged, and because they lacked renter’s insurance, their loss was significant.

The Rev. Colin Cooper, a retired minister serving in a non-stipendiary role at the Church of the Outer Banks, and his wife, Christine, office administrator, also suffered water damage to the first floor of their home, and because they lacked flood insurance, the cost of repair and replacement was theirs alone to bear.

However, assistance, both practical and financial, from fellow Christians, near and far, was soon forthcoming. Throughout the storm and for some time afterward, Bishop Wood was in touch with rectors of congregations in the affected areas. When he learned of the Fitzgerald’s loss and that of others at the church, he made arrangements for them to receive financial assistance through the Anglican Relief and Development Fund. The ADRF is continuing to raise and disperse funds to those who suffered loss, in the United States and the Caribbean, as a result of Hurricane Matthew.

Soon, additional aid began to pour in. A Christian ministry supplied a replacement car to a church member whose car had been flooded. Friends and family members sent contributions to help with the Fitzgerald’s expenses. An apartment was provided for the couple who were renting and church members who own a furniture store donated furniture. Loyal customers of the Surfin Spoon, from up and down the east coast, sent money when they learned of the need. In turn, the owners made a tithe to the church of the money given to them. And members of the local community, who work in the construction and building industry, donated time and materials to help cover the cost of repairs throughout the area.

Thankfully, the church office, which suffered extensive flood damage after Hurricane Irene hit three years ago, was not damaged this time, although water did come up to the front door. The YMCA where the congregation worships on Sunday mornings was not damaged either, nor was church equipment stored in a trailer in the parking lot.

However, in order to keep costs down, Joey and Brandie are doing all the repairs to their home themselves, with help from sons, Sam, 16; Jack, 13; and Luke, 9. (Daughter Lila, age 2, gets a pass.) They’ve managed to replace the sheet rock and insulation, and have grouted tile in the downstairs bathroom. However, there is still much to do before all the work is done. The old carpeting, which covered the entire first floor of the house, needs to be replaced by tile. That project will take up until Christmas to finish. Understandably, the family is weary from dealing with the destruction from the storm and the work of repair, as well as the frustration of living in a home, for weeks on end, where nothing is in its usual place. Prayers for the Fitzgerald family as they deal with this last phase of repair would be greatly appreciated.

Still, Joey, a published author, knows from past experience that the Lord will supply all their need and redeem this time of hardship. Before going to seminary, Joey worked as a high school art teacher for ten years, and for a while, served on the staff of Young Life. Leaving behind full-time employment to attend Asbury Seminary in Kentucky meant that he and Brandie would have to trust in the Lord to meet all their family’s living expenses. And that is just what God did, through Christian friends and members of his sponsoring church.

As he reflects on the hardships he and his family have encountered over the past two months, Joey feels blessed to serve under a bishop who has a servant’s heart and to be the recipient of the love and support of the larger Christian community. And he looks forward to sharing what is becoming yet another testimony, in his life, and in the life of his family, of God’s faithfulness.

The Rev. Claudia Greggs is the Clergy Associate for Christian Formation at Holy Trinity Church in Raleigh, NC.